By Dr Suzanne A Black and Stuart Jessiman

Having passed through the door of the therapist’s lair there I am now seated facing the psychologist. She smiles. I smile.  A simple success I suppose. She sat there dressed in a black dress and pearls, amid an array of beautiful old furniture with one bookshelf towering towards the tall ceiling, and an array other antique furniture, rugs and pillows. It all feels like the cave of Ali Baba – a jumbled array of many artifacts, but with a friendly feel. It certainly feels better being here rather than doing therapy in some sterile hospital environment – all plastic chairs, crappy coffee and strip lighting.

“He was neatly attired, polite if looking a little perplexed. He was at first rather hesitant to speak , which is not so atypical for people the first time they arrive for therapy . Then he broke into small talk and seemed more relaxed . ‘A rather British reflex’, he told me later. He made comment on some of the furniture and how nice the office was.  It is is fashioned in the style of Freud as I did visit his offices in Vienna, creating a cozy and reassuring environment.

It is clear that the psychologist is considering something I said or am doing. Perhaps it’s my mannerisms or attitude. I don’t know, but observations are being made while I blather on about this and that and I don’t like it. It tends to make me verbally combative  – certainly so with previous therapists. Silly really. They are there to help, yet for some reason I cannot surrender to their efforts. Ego, I suppose. But not here with this therapist – a New Yorker who is not threatening or disinterested. Bagels and Kojak came to mind. Funny that.

‘We discuss his combative tendencies, and I explain to Stuart that this is simply a form of defensiveness in motion. He is rendering himself vulnerable to someone he’s just met – in this instance me. It is simply an effort at self-protection. 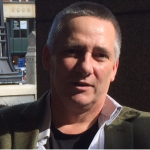 Stuart Jessiman – the bipolar, though he doesn’t know it yet.

her. I remain polite and cooperative. However, when threatened with difficult questions I employ the deadliest of verbal jousting tools, ‘British small talk’. Unfortunately, for me this is all rather compromised (as it always has been) by my disjointed thinking that makes my small talk turn into long talk as I try to make my small talk make sense  – you understand – all in a single sentence and with more subordinate clauses than a Dickens novel. But strangely this New Yorker follows my every word. Gosh, even I don’t know what I’m on about.

‘He was quite polite and engaging. He’s a Brit. He speaks well, but quickly. He has a habit of backtracking to restart something he was saying only then to shoot off on a different tangent. It’s funny. His humour is very anarchic and eccentric. It is humour coming from someone that wants to be very much like by his audience, but it is driven, in part, by untamed energy as well. His anger is visible at time, but he’s too polite to express it. It’s just something that shows in his face from time to time. ’

Grrrrr, I just wish, I could discipline what I say and how I say it. I struggle with logical and sequential ideas. What comes out of my mouth can be entertaining. However, when in therapy, where I want the therapist to understand how I feel and what I think, it becomes hugely frustrating. Despite my best efforts, I invariably shoot up and down verbal cul-du-sacs or race away down some winding tangent. I start with a subject, a main theme, an issue of importance to me, but the ideas find other ideas that despite myself I follow. I become more animated and speak faster as I try to retrace where it was that I started first started talking. Funny at times, but the important point has been lost and then I become frustrated. What was I getting it; what was I trying say? It all broadly makes sense, and if you’re a therapist you’ll make the effort to follow. But what about those people I know and have worked with? They haven’t the time to decipher my cluttered utterances. They must think I’m a nutter.

“Here, what Stuart is describing is what we call tangential and circumstantial thinking – the thoughts segue from one to another with free associations, and one can lose one s train of initial thought in doing so (tangential), or remembers to return to the initial thought (circumstantial). This is one of the identifying features of Bipolar – the seemingly effortless, mellifluous flow of ideas replete with visual imagery and a bounty of adjectives –  very entertaining , but can be rather hard to follow if one is not accustomed to such a ‘thought process . It all makes sense in his mind, but he s not verbalizing out loud the connections he s making between the thoughts he’s expressing aloud to me.  I also noticed that during his speedy oratory, he often does not complete his sentences, i.e., his thoughts, and it is like he’s trying to put a puzzle together that he will never complete.’

I generally employ metaphors and animated descriptions to try to describe my state of mind. Sometimes likening explaining how I feel to something else helps enormously. But metaphors if mixed with factual description described poorly can be confusing for the listener. I think she isn’t able to follow my onslaught of verbal slurry, but then I realized she is catching on quickly and I feel very reassured.

‘I listen, study and think as I talk with Stuart. I’m not a therapist who keeps complete distance between my patients and myself. He’s funny and sometimes I respond with some New York wit of my own which he gets and likes. But all the while as I listening I’m becoming convinced of something… ‘