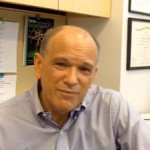 Dr. Eric Nestler, M.D. believes that when it comes to treating depression, we should be doing better.  Less than half of those with depression get better after receiving maximum treatment. Dr. Nestler describes depression as a broad syndrome hat involves many different diseases. Because the specific causes of depression cannot be identified, this disorder is difficult to treat.

In order to better understand the causes of depression and ways to treat it, Dr. Nestler began working with animal models. Because depression is a mixed syndrome, it is difficult to find an animal model for depression.  To get around this obstacle, Dr. Nestler decided to explore the negative effects that chronic stress can have on mice.

All the test mice were put under conditions that would induce social defeat stress. A test mouse was put in a cage with an aggressive mouse. The aggressive mouse would attack the test mouse for a couple of minutes. Then, the mouse and test mouse were put in the same cave divided by a screen in order to prevent more physical harm. This procedure was repeated every day for 10 days and many of the test rats began to exhibit symptoms similar to depression in humans.

Symptoms the stressed rats began to show were social avoidance and anhedonia. When placed in a cage with their familiar rat brothers, test rats avoided the rats. The test rats also stopped participating in pleasurable activities such as running on an exercise wheel.

Test rats also experienced hyperactivity in the stress response. They showed greater levels of cortisol, an increased likelihood for drug addiction, and many became obese.  These results show that the chronic social defeat stress the rats were exposed to caused symptoms shown in depressed humans.  Also, the stressed mice could only be treated with human antidepressants, and other medications were ineffective.

One of the most interesting observations of the study was that 1/3 of the rats exposed to the chronic social defeat stress situation did not develop the syndrome. These rats were resilient and were able to cope and adapt to the stress in a positive way.

Dr. Nestler wants to direct future research towards understanding why some rats are more resilient than others and how this relates to the resilience in humans. If we can better understand the way resilience work, we may be able to find better treatment options for humans with depression.

For an interesting video of Dr. Nestler click here to be taken to the Psychiatric Times website.