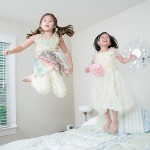 The best way to tackle an illness is to start treatment as early as possible. In the case of depression, recent studies has revealed that there may be a way to identify depression symptoms in children. An fMRI study was conducted on a group of preschool students to see if there were any differences in the brains of depressed and non depressed kids at this early of an age.

The children were shown pictures of faces that had a myriad of different expressions. The faces showed the different emotions of happy, sad, fearful, and neutral. When viewing the photos, the fMRI examined the brain activity of the the different participants. To the researcher’s surprise, there was a difference between children who were and were not depressed!

The preschoolers with greater amygdala activity went on to demonstrate a greater negative affect later on in life. These findings are a huge step in a positive direction for treatment of depression. If the depression can be identified at this early of an age, individuals can begin treatment right away and avoid problems caused by the illness that would occur later in life. These individuals could start learning strategies to manage depression much earlier, which may decrease the negative impact of the illness in the future.

Perhaps one of the most exciting components of this research is that there is a difference of brain functioning in individuals who have direction. Finding this difference has sparked investigation of new treatment programs, other brain differences, and has enhanced the overall diagnosis ability of doctors.

To learn more about this research and the battle against depression, get the full story by clicking this link.