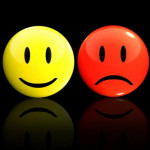 I am always interested in articles that help us understand how medications work, and perhaps how the brain functions in different mood states.

Looking at the positive is a very important part of what makes us happy. But depression has very powerful effects on brains that almost force us to scan the world for negative information.

Last week I was talking to one of my patients with depression about medications. I gave her a summary of information about one medication that I thought was worth considering, and the only information that she seemed to recall was about side effects and something that I said about the chance that it might not work. She did not seem to have focused at all on the reason for taking the medication, the ways that it might help her. Ironically, we had had a very similar conversation about a different medication three weeks earlier. At that time she was not depressed. During that conversation she had the opposite focus, she asked about a couple of side effects, but mostly focused on possible benefits and how to maximize those.

This study showed that people with depression, as well as people who were not depressed, who took and antidepressant shifted their focus so that they were much more likely to look at positive ideas and images than negative or neutral ones.