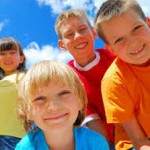 One of the most common questions I am asked is, what are the odds, if I am bipolar, of my children having bipolar.

Recently we ran across a research study that tries to answer this question.

A word of caution, this study only followed children from age 12 to age 20, so it does not address lifetime risk, only the risk during adolescence (which is one of the peak periods when symptoms first appear).

Two factors predicted bipolar disorders in the children: younger age of a parent at birth of child (why this would be the case is unclear) and bipolar disorder in both parents (a commonly noted risk factor).

All told, about half of the children of bipolar parents developed a psychiatric condition of some kind by the time they reached age 20. The most common diagnosis was an anxiety disorder.

We must do more work to develop interventions for the children. At this point, only family focused therapy (FFT), an intervention developed by researcher David Miklowitz, has shown significant benefits over standard treatment in children with a positive family history of bipolar disorder who already have a diagnosis of anxiety, depression, or bipolar not otherwise specified.

One recommendation that I feel very strongly about: bipolar parents need to work hard to develop a family “culture” that does not stigmatize mental disorders and supports getting early help for mental problems, since early intervention may be important for the children of bipolar parents…