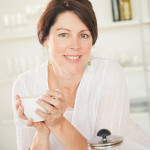 Feeling down? An article in Psychiatric Times suggests that drinking a couple of cups of coffee in the morning might help your mood. The study they cite found that those people who drank two or three servings of coffee per day (8 ounce cups of drip coffee – or shots of espresso) had a 50% lower rate of suicide compared to those who drank one or fewer servings per day.

Dr. Michel Lucas and his colleagues from Harvard Medical School looked at the data from three large studies of American men and women—the Health Professionals Follow-up Study, the Nurses’ Health Study, and the NHS II. They also found that drinking more than three drinks per day did not seem to yield much additional benefit in terms of suicide risk, and, as the authors point out, higher levels of coffee intake are associated with other harmful effects, such as increased anxiety, and negative effects on the heart and on blood pressure.

As the article points out, we know that coffee boosts such neurotransmitters as serotonin, dopamine, and noradrenaline in the brain, which have mild antidepressant effects.

A thoughtful review of caffeine’s effects on cognition published in, of all places, the Journal of Alzheimer’s Research, finds that the data on caffeine as a cognitive enhancer is much weaker than you might think. Its main effect is to improve attention in situations where the person is tired. Otherwise, for every beneficial effect reported there seems to be a counterbalancing negative effect. And the data on its role in preventing Alzheimer’s is also mixed.

The authors of that study essentially come to the same conclusion as Dr. Lucas: caffeine is not really a cognitive enhancer, it is a mild stimulant (improving alertness when fatigued) but most of the rest of its positive effects on cognition are due to its effects on mood.