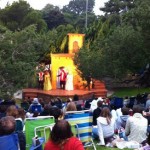 I saw a production of Hamlet last month, performed by the Shakespeare-by-the-Sea ensemble. Having not seen it since my diagnosis, I felt as if I was watching the play for the first time. Do you remember the story? “To be or not to be?” – And all that.

Hamlet, the young intense Danish Prince, is distraught over the sudden death of his father, the King, followed by the speedy remarriage of his widowed mother to his smarmy uncle (the brother of the dead king). Early in, he sees the ghost of his dead father, who tells him of his uncle’s murderous crime. Hamlet then feigns a madness as he plots to expose his Uncle’s hand and his mother’s treachery. And Hamlet is not the only character grappling with the slings and arrows of mental illness. Ophelia too goes cuckoo shortly before she drowns herself amongst reeds and flowers. Really, by play’s end, no one is coming across as exactly mentally well. Something is truly rotten in the state of Denmark.

And all the world’s a play. Except at the end of the night, curtains closed, I find I am still bipolar – the “crazy” one. Yet like Hamlet, I often feel as if I am surrounded by characters much less sane than myself, as if my own madness is sanity and it is everyone else whose actions seem bland or trite or lacking in passion and integrity. Which is why I can frequently be heard saying: Wait, I’m the certifiable one in this scenario? I may have the official diagnosis, but man oh man, there are a lot of nuts out there simply letting themselves get away with it.

One of the great things about having my diagnosis is that it has forced me to deal with my own ‘insane’ behaviors and actions, while most people simply get away with their own unhealthy behaviors without ever having to scrutinize and assess whether or not they are sound. In this way, all my forced self-awareness has made me a much more present person. And that is a kind of sanity.

In Hamlet, the psychosis is a pretense the Prince employs to manipulate those around him, but the belief at the time the play was written was that anyone, at any time, could fall mentally ill. The Elizabethans thought the body was made up of four elements, which they called humors. The four humors are phlegm, blood, yellow bile and black bile. Melancholy (as depression was then called) was associated with black bile. For a stable life and good mental health, it was believed that the four humors needed to stay in balance.

The names may have changed, but end of the day, it’s still all about balance. And if my uncle killed my dad to bed my mom, I’d go a little nuts myself.