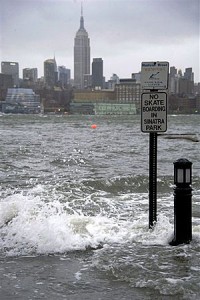 The recent hurricane that hit New Jersey and New York reminded us of the research on the aftermath of disaster conducted by a friend and colleague, Kent Harber, PhD.

Kent has been very interested in posttraumatic stress disorder, and in particular, the work of Dr. James Pennebaker, on the value of sharing one’s story in the aftermath of trauma. Jim Pennebaker showed that if you took college students who had had a traumatic event in their past and got them to write in detail about what had happened, there was a significant reduction in various markers of distress over the next school year, including fewer visits to the student health center.

In the days after the San Francisco earthquake of 1989, Kent wanted to study how social factors influenced people’s response to the disaster..

Early on he found that there was a real outpouring of concern and a willingness to share: both in terms of directly providing help but also by listening to people’s stories. This period of engagement and sharing lasted about two or three days.

After that there was a period that lasted for a couple of weeks, during which people were really no longer interested in hearing others’ stories (although they still wanted to share their own).

This period of compassion fatigue, directly correlated with a drop in people’s sense of concern for each other… and the emergence of a period of cynicism (where is FEMA? They don’t care about us. Nobody cares about us. And no, I don’t want to hear your story).

Right now, in New York and New Jersey, we see the same process at work. People are very much less interested in helping each other, and in listening to each other. There are fights about gasoline. People are much more cynical about each other and about government.

Experience teaches us that this happens after every disaster. And it doesn’t last, although it can be a period of great subjective distress in those who are struggling to cope.

One antidote would seem to be reaching out to those outside of the area to talk about one’s feelings.

A number of studies suggest that this kind of effort can pay off in terms of a greater sense of well being, fewer physical and mental health problems, etc..