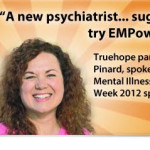 I have been surfing the web looking for other blogs on the topic of bipolar. It is an interesting and humbling experience. There are so many brave and thoughtful people writing about their struggles (or victories) living creatively with moods. If you haven’t done some surfing (of the web) I encourage you to do so.

One of the sites I stumbled upon, a site called “bipolar burble” by Natasha Tracy, which is both popular and controversial, had a post about EmPowerPlus that made me realize that I have not written anything about this supplement.

It is marketed as a “micronutrient solution” for depression, bipolar, anxiety and ADD (almost all of the disorders in psychiatry except for schizophrenia!).

I have, over the years, worked with 5 people who decided to try EmPowerPlus and of those 5, at least four of them had negative experiences. The main problem with EmPowerPlus is the strong encouragement to get off medications that comes with the program, despite the weak evidence that it works. For most of the people I see, as bad as things might be with medications, without medications they usually (not always) become worse.

One of those five challenged me to dig into the science behind EmPowerPlus.

However, journal articles serve many purposes, and not all journal articles can really be said to “support the use” of a treatment. The articles referenced on the site are almost entirely single case reports. These are the scientific equivalent of “endorsements.” [You know, the kind of comments you see on almost every website, “I really thought this product was great,” etcetera, etcetera].

To illustrate with one of the saddest stories in the history of pharmaceutical marketing, Parke -Davis (which was later bought by Pfizer) spent millions and millions of dollars promoting the use of gabapentin (Neurontin) as a mood stabilizer.

There are, of course, many many single case reports, as well as some relatively large case series (multiple case reports from one author) that are strongly supportive of its use.

Some of the best and smartest psychiatrists I know ended up speaking about this medication and its usefulness.

I was approached to speak about Neurontin for Parke-Davis and thought I would do some searching for information to see what was known about the medication. After a little digging, what struck me was that there were many case series, but NO double blind placebo controlled studies. And that got me wondering… after all a small controlled study is not that expensive…. It took some searching but I eventually learned that Parke-Davis had, in fact, funded at least two controlled studies… so I wondered why the results never got published… And ended up finding a summary of the results in a pretty obscure location.

You will, perhaps, not be surprised to learn that these studies were “negative studies” – they did not find that gabapentin (Neurontin) helped. What really stunned me was that the results, on the whole, suggested that gabapentin was statistically significantly less effective than placebo. In other words, these studies, which were funded by Parke-Davis, suggested that gabapentin was actually a mood destabilizer. And yet Parke-Davis kept right on marketing the medication and did its best to hide the results from psychiatrists.

The result of all of this was the largest (at the time) settlement by any drug company for fraudulent marketing. But not before thousands of thousands of people were likely harmed by the effort.

As it happens, the case reports supporting effectiveness, aren’t all that that you can find out about EmPowerPlus’s effectiveness if you do some online research. For a number of years the US Government has supported a site called ClinicalTrials.gov which lists almost all the research studies of drug effectiveness that have begun or been proposed.

If you go to that site you discover that a large clinical trial using proper science was actually begun soon after the initial case series supporting the effectiveness of the treatment was published in the Journal of Clinical Psychiatry.

That clinical trial was stopped before the results were published.

At the time I wrote,

You don’t have to be too much of a cynic to realize that a clinical trial supported by a drug company (or nutritional supplement company) that did not result in a publication has a fair chance of being what is called a “failed clinical trial” – meaning that the results did not support the effectiveness of the treatment.

Today I went back and was surprised to see that the trial lists some results.

Check it out yourself –

That is all that it says. There is no statistical analysis at all. [By inspection it appears that these two numbers are not statistically significantly different.]

In fact, you can’t even tell whether the result is a before and after comparison or just a single rating…  You have to assume that higher numbers are worse, but you can’t be sure…

Until there is more data I think the overall evidence supports my view that EmPower Plus is an expensive placebo. And that is why the largest scientifically valid study of the supplement, a study that was begun in April 2005 (8 years ago), still has no published results.

The worst thing about the product is the fact that the TrueHope site, and the support line that comes with the program, encourages you to stop taking medications in order to “really get the full benefit” of the supplement.

And that is dangerous advice.