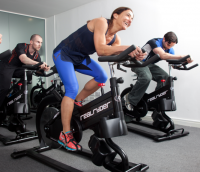 A couple of months ago a writer who we have collaborated with in this blog (Eric) wrote an article summarizing some of the research literature on the effective dose of exercise. He cited some studies suggesting that very high amounts of exercise may be hazardous and then came to the conclusion that about 30 minutes of moderate exercise four or five times a week is a reasonable dose.

Along comes an article in the New York Times which proposes that one minute of exercise may be enough.

Gretchen Reynolds wrote, “One minute of arduous exercise was as effective as 45 minutes of gentler sweating.”

The article caught our attention and so we went to find the research article.

The study looked at the effects of twelve weeks of either “Sprint Interval Training” or moderate intensity exercise on a number of health indices in a group of middle aged, sedentary males.

Looking at the effects on aerobic capacity (mVO2), muscle function (mitochondrial content) and metabolism (insulin sensitivity), the results did, indeed show that the two forms of training were identical.

We did find a bit of hyperbole in the New York Times article.

Still, the results are pretty intriguing. Stay tuned for more on this topic.

“One Minute of All Out Exercise May Have Health Benefits of Moderate Exertion,” Gretchen Reynolds. New York Times. April 27, 2016.