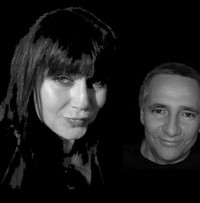 The last blog posted some three hours ago jumped over this one, much as thoughts are given to do in my head. This, in fact is a description of me meeting the therapist for the first time. My earnest apologies. Maestro, the music if you please.

…My wife, caught up in a Maelstrom of hypomania, seeks and finds a Therapist. I am not fond of them, but I don’t want the marriage to end so I agree to go. She finds an English-speaking Therapist in Paris where we currently live and here I am knocking on her office door for the first time…

She answers and following a rather formal handshake I am lead through the door into therapist’s lair. There I am seated facing the psychologist. A pause. She smiles. I smile. A simple success I suppose. It’s how these thing start and initial impressions are positive.

She’s rather gothic, sitting there dresses in black, composed, but not intimidating. We sit amid a vast jumble of bookshelves towering towards the tall ceiling, an array of oak cupboards and other furniture, odd coloured rug pillows – all reminiscent of Freud’s den for exploration of the unconscious (I learn later). There are plenty of other bits of bobs from across the world, places where this therapist has been I’m guessing. It all feels like Ali Baba cave – disorganised, but with a friendly feel. It certainly feels better being here rather than doing therapy in some sterile hospital environment all plastic chairs and strip lighting.

Over the hour it becomes clear that the Suzanne the Psychologist is considering something. Is it my mannerisms, words or attitude? I don’t know, but she writes notes, something I find intrusive and often the trigger for verbal combat with Therapists. Silly really. They are there to help, yet for some reason I cannot surrender to their efforts to do this. Is this ego or just being belligerent?

But here is a different therapist. She’s clearly in command and because I have developed a degree of respect (or fear) of her I don’t challenge. Instead, I comply and engage in the therapy.

I just wish I could discipline what I say and how I say it. I struggle with sequential thinking. What comes out of my mouth can be entertaining, but when in therapy where you want to be explain how you feel to feel it becomes hugely frustrating. Despite my best efforts, I invariable shoot up and around winding tangents. I start with a theme, but the ideas beget ideas that despite myself I follow. I become more animated and speak faster. As I try to remember where I was and what I was trying to say funny at times, but often the point (if there was one) has been lost and then I become frustrated. What was I getting it; what was I trying say? 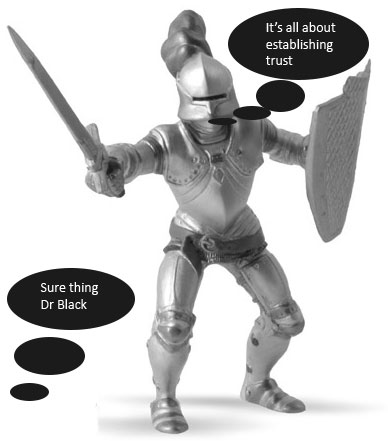 One must work on developing trust between a therapist and client.

cannot always be as open as one would like.mI generally employ metaphors and animated description to try to describe my state of mind. Sometimes likening how I feel to something else helps enormously. But mixed metaphors together with poorly described facts can simply confuse the listener. In UK shorthand: you sound like a nutter.

I’m asked to explain a typical day of late. As I’m sure you know trying to explain a day of hypomania followed by a crashing lows is difficult. I talk of endless hyper-energetic ideas gushing from a mind, a mind seeing no parameters, no limits on what I can be done.

Hey, I’m sprinting on stage to accept an Oscar for the film script I haven’t yet written or acknowledging the acclaim for my award-winning painting – still needing a canvas, paint and a theme. All is possible. This is a big universe!! Yet only hours later I feel the dead hand of lethargy weight down my spiralling thoughts and a sense of futility bursts the bubble of brilliance. Now I feel so stupid for believing I was anything close to being special. I just want to nail myself beneath the bed covers. Why do I insist on believing I can fly so high despite it always ending like this?

All the while the therapists listens. ‘Well, she deserves the money listening to this bullshit’. How does she stay awake’? She appears to follow my ramble interjecting here and there probing and questioning…I wonder if a bouncy castle would have helped Isaac Newton understand gravity far quicker than a chance apple falling on his head…‘Shut up! Humour masks confused thoughts. I deploy jokes and wit instinctively. Better the clown than the madman.

I, the psychologist, am thinking to myself: “As a matter of fact, Stuart, yes, I am sitting here listening to you very attentively and with great interest, trying to ‘differentially diagnose’ what in fact, is going on for you .So, yes, you are reading me accurately and your anxiety is well appreciated and understandable. I might add that I do appreciate your candour’.

I have had less than productive relationship with previous therapists. They were mostly verbally combative affairs with questions about their ‘methods if there was a method being used.  But I will concede this psychologist is different.  Her manner is more relaxed than the others and she responds to my silliness and wit without making me feel a complete idiot. This I find helpful. Other therapist’s ‘professional face’ has provoked combative verbal jousting or simply make me defensive and dishonest. This psychologist has a sense of humour albeit clearly mannered.

As I talk, the psychologist interjects and asks if I would be prepared to come back later that afternoon to do a test. I agree, but this request, trips the growing sense of rapport we had. I feel defensive and ask what purpose it will serve. She suggests she has a feeling about what the problem may be. ‘Why don’t I take the opportunity to explore further what’s going on’?’ she says. Well okay. At least my wife will be pleased.