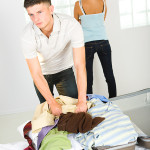 I’ve been working with a very successful attorney who has been struggling to find a way of staying in his marriage for a couple of years.

The heart of the problem is that his wife had a serious health problem (which is now resolved), but through the process of dealing with this health problem she  became depressed and discouraged about her health and had to face the fact that she probably would not ever have children. She is a very different person now than she was when they married four years ago. She does not take care of herself physically, she feels unattractive, and they have had no sex for three years.

He is in his late 30’s and it is difficult for him to imagine never having a sexual relationship again. On the other hand, they love each other, and both of them feel a great sense of loyalty towards each other.

She has resisted his suggestions that she get a psychiatric assessment. She did go see a counselor for a few sessions, and the two of them have been going to couple’s therapy for the last six months but that seems to be, by mutual agreement, not going anywhere either.

Thinking about this dilemma once again reminded me of how much context influences our ability to solve problems.

This young man is a supremely competent negotiator.

But he has never approached this problem with the kind of energy and determination that he might show when tackling a difficult work situation. The pattern between the two of them has been that he would try a little to make things better, and then get discouraged and stop,  then she might try a little and quickly get discouraged and stop. There was never any ability to make a consistent effort.

Thinking about the strange feeling of disempowerment that he experiences trying to resolve this problem got me to thinking a bit “outside of the box.”

They had identified they had a relationship problem and gone to see couple’s counseling but that hadn’t worked. Was I missing a creative solution, I wondered as we talked about where he stood.

These books have at their core certain principles of how one goes about changing behavior.

Dr. Leman suggests that behavior doesn’t change as the result of fights. He strongly encourages people to avoid overt conflict with their kids or partners.

Behavior changes because good behavior gets rewarded and behavior that is not so good results in the loss of a reward.

The example he gives is of a parent with a child who spits her food across the room. The parent doesn’t say anything but leaves the room and leaves the child alone.

The lesson is that if you misbehave your parent goes away for a while.

This approach is much more powerful than fighting or arguing or punishing.

It also requires more effort. You have to think before you react.

But it is my experience that if you consistently apply these principles to close relationships things do indeed improve.

Next week we will see how he did…