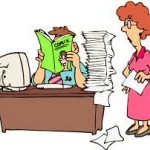 Procrastination may be related to impulsive decision making. This somewhat surprising finding is based on a large study of twins.

Most modern explanations of procrastination have focused on avoidance and aversion. You put off things because you are afraid of some negative consequence (doing badly, not meeting your standards, etcetera), in other words, you are avoiding a bad outcome.

One way of making sense of this association is that both traits might be related to difficulties in managing long-term goals.

If it is hard for me to plan for the future I may decide to avoid doing anything, or I might decide to just make a quick decision.

Based on these observations, the researchers in this recent study looked for possible genetic connections among  these traits in an analysis of data from a large twin study (a study that compared the similarities in personality between genetically identical twins and non-identical twins.

The study looked at 181 identical and 166 not identical same-sex twin pairs. The twins completed several self-rating questionnaires on procrastination (ignoring goals, avoiding taking action, and need for outside deadlines), impulsivity (feeling the need to make quick decisions, not thinking through things), and failures of managing long term goals (e.g. “forgetting” to do things).

The authors came up with a hypothesis based on human evolution: early men (hunter-gatherers) might have been better served by immediately satisfying their basic needs than by creating and persevering with long-term plans. In this environment it might have made more sense to make quick short term decisions (impulsivity) and avoid making big long term decisions (procrastination).

One implication of this study is that strategies for helping people plan for and act on long term plans might help them avoid impulsive decisions and procrastination. In other words, the solution might be to develop long term planning skills that might be lacking, rather than try to “understand” the “reasons” why you put off taking actions, or act impulsively.