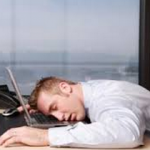 Sleeping can become a major preoccupation at times of stress, or when one is depressed, or when the seasons change, as they are doing now.

We tend to think about sleep as being something that is good for you. The more sleep and the better the quality of that sleep the better off you are.

Elsewhere in this blog I’ve talked about the compelling evidence that sleeping too much is at least as much a risk factor for fatigue as sleeping too little.

I was intrigued to run across an article summarized in Journal Watch Psychiatry that went well beyond the usual focus on quantity and quality and began to investigate how the timing of sleep affects how restful it is. The article, which appeared in the proceedings of the National Academy of Sciences in February 2014 suggested that disruptions of the normal daily or circadian rhythm has effects on gene expression and the very structure of our genes, such that sleep that occurs at the wrong time can clearly be shown to disrupt normal human physiology. In other words, if you have eight hours of good quality sleep that occurs at a time when you’re not supposed to be sleeping, it can have negative rather than positive effects on your brain and body.

It turns out that gene transcription, meaning making proteins based on your genes, varies in a rhythmic fashion.

In the study, missed time sleep had major effects on many normal processes. It virtually eliminated the normal rhythmic transcription. It disrupted the expression of circadian clock genes and proteins that regulate gene transcription in general. Mistimed sleep decreased rhythmic transcripts in the blood transcriptome from 6.4% to 1.0%. In a parallel analysis, the time course of expression changed in 34% of transcripts, including those involved in circadian clock genes, chromatin modification, CREB binding protein, and regulators of transcription and translation processes.

As the authors of the summary conclude:

Mistimed sleep as in jet lag and shift work (rather than sleep restriction) has a major suppressive effect on translation and transcription and, probably, downstream effects on the expression of thousands of other genes. This finding makes apparent why disrupted sleep cycles are detrimental to health and why treatment of sleep problems may have antidepressant effects (Physician’s First Watch Nov 11 2013).

I would add, based on my experience working with many young professionals in San Francisco, that mistimed sleep is endemic in many people whose sleep cycle is random or hugely variable or who get very little sleep during the work week and try to catch up on the weekends.