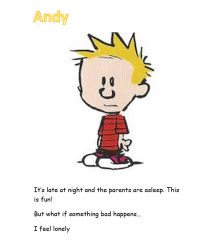 Andy and the Nighttime Child – Staying Up Late

In our practice we work with a lot of bright young people in the information technology industry. It often seems as if all of them stay up until all hours of the night certainly many of them do and sometimes to their detriment.

We know that sleeping late is one of the best ways of increasing depression – a phenomenon that we see every winter when we switch from daylight savings time to regular time and so many people become more depressed in the following week because they’re now waking up an hour later by solar time.

And there are other problems with going to bed very late at night including the difficulty getting enough sleep in order to function well the next morning.

We’ve been working with one young man for a couple of years and he has made significant gains in many parts of his life, but the problem of sleeping tonight is stubbornly resistant to change.

Where does that stubbornness come from I wondered.

One hint came from the way that Andy would talk about this. On the one hand he would tell me with solemn seriousness about all of the consequences of staying up late including worsening mental health, trouble at work, etc. On the other hand whenever we talked about it and started to come up with solutions there was a curious gleam in his eye and a hidden smile as though it was something that he was kind of proud of. It was a bit like talking to a kid who is stolen cookies from the cookie jar.

There were two themes that emerged in our discussion. One was that he felt anxious about going to bed in a way that seemed irrational. The other was that he enjoyed the sense of being rebellious that came with staying up late, even though, as I pointed out, there really wasn’t anyone to be rebelling against since he lived with other young professionals who also stayed up too late and his father was no longer alive and his mother had the same problem.

Where are the parents?

I was quite disciplined until part way through college. I wasn’t that disciplined on the weekends but I wouldn’t stay up past 1 or 2 am.

During the week, to a degree, my Dad was there and if I was up too late he would turn off the computer. I also had to get up at 6 am.

Beginning of my junior year. That was when I got worse – procrastinating on homework and staying up later. That was when my relationship with Jane got worse. That drove her bonkers because she did her work in the evening and wanted to spend time with me.

After that we kind of drifted apart. She never talked about what was happening. It was a year to the week after his suicide that she broke up with me.

As with so many of the people we work with, and he had always been a good kid who struggled to meet his family’s expectations. And staying up late became the one way that he was able to be rebellious.

Another young woman we worked with talked about hiding in the closet with a flashlight in order to read romance novels when she was in high school. That behavior continued through college and into law school where it became a serious impediment to her success. But she found she just couldn’t stop doing it.

As I pointed out to both of these people, the only parents remaining who matter are the internal parents and the dialogue that needs to happen is one that incorporates the internal parent, perhaps too punitive, the internal child, playful and rebellious but perhaps not wise, and the internal adult that can make decisions based on what is practical and useful.