An experimental computer program is associated with improved attention and working memory in people over age 60, even 6 months after training.

Somewhat fuzzy-brained after a poor night of sleep I ran across this summary of a paper that was just published in the prestigious scientific journal Nature (Anguera JA et al., Nature 2013 Sep 5; 501:97).

Where could I test drive this application, I wondered.

I went online to find out more, and discovered that the study was published by a local group of researchers at the Gazzaley Lab of UCSF’s Mission Bay campus.

Browsing through their site I learned that the program they studied (NeuroRacer) was not ever going to be commercially available. But they suggested I contact a group (Akili Interactive Labs) that was developing an iPad/iPhone app based on the same technology.

I contacted them on behalf of the readers of this site to see if we might partner with them in beta testing the program. I will keep you posted.

Meanwhile, here is a bit more about the study, which had some pretty impressive findings.

Using the application for just 12 hours over six months had an impact not only on how well people did on the app (no big surprise) but also on overall performance in two key areas that are negatively impacted by depression and bipolar – working memory and sustained attention. 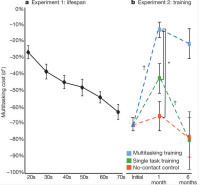 The researchers found that the program seemed to rev up the pre-frontal cortex (the part of the brain responsible for maintaining sustained attention). The effects could be seen in the brain waves (EEGs) of the people who participated in the study (enhanced midline frontal theta power and frontal–posterior theta coherence) and appeared to counteract some of the effects of aging on the brain.

Even more significantly, the results persisted for six months after the study.

Imagine an exercise program that resulted in changes in body composition that persisted for six months after you stopped exercising!

It is not too surprising that there are people clamoring to get access to NeuroRacer.

If any of our readers are interested in knowing more about the commercial application that is being developed by Akili Interactive Labs, please send me an email (peter@moodsurfing.com).