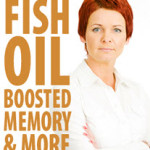 Fish oil has been touted as an intervention to reduce the risk of stroke, and heart attacks. It is in fact approved by the FDA as a “nutraceutical” for the treatment of hypertriglyceridemia (a kind of fat found in the blood stream) that may be associated with heart disease.

The article notes that recently the strength of this effect has been questioned. It concludes…

Based on the current research, the frequently discussed benefits of supplementation with omega-3 fatty acids EPA and DHA in reducing cardiovascular events, such as heart attack and stroke, remain generally unproven, while eating fish at least twice a week may be beneficial.

It has also been recommended as a treatment for depression and memory problems.

The article notes that the ratio of DHA to EPA, or the absolute amount of EPA, may be crucial.

The best evidence for omega-3’s has been in cases of major and moderate depression, but not mild depression, and one group of researchers has concluded that the antidepressant benefit is strongly dependent upon the EPA content of the supplement.

We have discussed this in another post on this topic.

On the other hand, its effects on memory may be more related to DHA content.

In a small study of healthy, young adults, better working memory performance has been found to correlate with higher levels of DHA (as measured in red blood cell membranes), but not EPA (Narendran, PLoS One 2012).

The importance of getting reliable information about supplements is illustrated by the fact that, of 35 supplements tested, only 24 passed the Consumer Labs tests. 2 of them had unacceptably high levels of mercury, dioxins, and polychlorinated biphenyls (PCBs) which can cause brain damage.

As is usually the case, the supplements from Walgreens, CVS and Price Club that were tested passed all the tests (Consumer’s Union found the same thing in their older tests).

A recent study published in the Journal of the National Cancer Institute reported that men who had higher blood levels of the two fats (DHA and EPA) found in fish oil had a somewhat increased risk of prostate cancer. This study did not ask these men about their diet and it was not a clinical trial (giving people the supplement and observing what happened). Studies that look at associations run the risk of assuming that A (taking fish oil) causes B (prostate cancer) even if there is no such link (A and B are caused by something else – for example, other studies have suggested that fish oil protects against prostate cancer – maybe the subjects who were concerned about prostate cancer decided to take fish oil to prevent it from happening). There is an ongoing large clinical trial of fish oil which will likely answer the question.