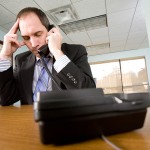 In this world, there are two kinds of jobs: Jobs that one could perhaps do adequately, and jobs that are impossible.  For whatever reason, a lot of folks’ we know tend to prefer impossible jobs.  Maybe because they’re more exciting and interesting.

The key to an impossible job is recognizing that no person could do all the work that falls within the scope of the job description. Thus, the central task is identifying priorities.

For impossible jobs, what determines how stressed out and overworked you are is often more about what your internal and sometimes unconscious goals for yourself are.

We learned this after working for many years with a very high powered executive in the construction field. We  discovered that there was a remarkable consistency in his level of stress.

Whereas, it seemed as though the outside world was imposing overwhelming demands on him, the fact was he always would accept tasks up to a certain level of distress no matter how busy or not busy the company was that he was working at.

In other words, his own internal sense of responsibility required him to tackle more projects than he really could without being always very stressed and distressed.

At first, our focus was on how to find jobs that were less demanding, but it turned out that real success was achieved by understanding how, as a child, he learned that he was only “all right” if he was constantly pushing himself at a frantic pace.

If you have an impossible job and are feeling stressed out, here’s a thought…just do 5% less than you’re doing right now.  In other words, think of the various projects and tasks that you need to do and eliminate 5% by choosing the least important and productive tasks.

This is a very small change in work load, but we think that you will find that you actually do better work and perhaps even get more real work accomplished if you go on this very slight work “diet.”

That business executive found that by doing this he ended up eliminating the crises in his life that led him to change jobs every three or four years, and in doing so he was able to move further ahead in his career without being so unhappy.