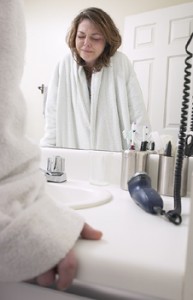 This is an animal model of the human experience of depression.

In the learned helplessness model an animal is repeatedly placed in a situation where it has no ability to avoid a painful outcome After a while the animal begins to look depressed (listless, passive). At that point if you place the animal in a situation where it could escape from pain it will no longer try to escape. It will passively endure pain.

The model is interesting, but what we find even more frustrating in our work with depression is how people who are depressed will sometimes act in ways that almost encourage unpleasant outcomes. Sort of like, “here we go again… what the heck… let’s get it over with.”

Perhaps depression is a state that we enter when we have to endure something that seems intolerable. One example, is the need for a mother to stay with her children despite a terrible relationship.

Now there are usually options, but back in the distant past (when there were far fewer humans) there might have been no alternative to enduring the pain (other than putting her children at risk). So depression was a state of mind that allowed, almost forced, the woman to stay in that situation so that her children could survive…

The trouble with such biologically determined states of mind is that they are inflexible. Behavior falls into a pattern that is very hard to interrupt. Even when the circumstances that triggered the state could be avoided.

Now add to this explanation the fact that we have evolved a brain that is always trying to understand and predict how the world is going to work (see “You Can’t Fool Yourself” on this site). That brain has to make sense of things.

It can do something similar in a therapy session… prove to itself that yes, it understands the world and the world is uncaring… in fact, it says to itself, depression is a rational response to the situation. 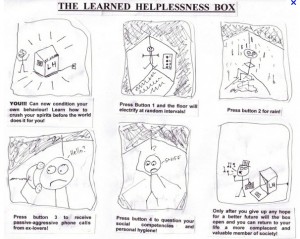 In other words, a biological state of learned helplessness is triggered, likely the trigger is something of a false alarm (in fact the situation wasn’t as bad as it might have seemed).

Still,  the brain goes about “proving” that it understands what is going on. The world is a terrible place and no one is going to help… and by sitting in the session and repeatedly saying to itself, and the therapist, that no one (even you my therapist) can help, it “proves” that its theory is correct. And as horrible as the theory is there is relief in at least “understanding” how things really are.

How do you break out of this?

What if that young woman, feeling sad and alone, focused her attention a bit more on what the therapist was trying to do and say, rather than being so completely stuck in her own belief that there wasn’t anything that could help?

With lots of effort, it is possible to shift attention and to become a bit more aware of other possibilities. For more on this theory and process you might want to read about the Cognitive Behavioral System of Psychotherapy (CBASP).