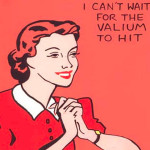 Often anxiety is the symptom that is of greatest concern to people who have bipolar or depression.

Working through my thought process as I tried to come up with an answer for the woman who emailed me might help point out some of the challenges related to medication treatment of anxiety.

The picture on the left refers back to a time (the late 1950’s and early 1960’s) which can be thought of as the heyday of pharmacologic treatment of anxiety.

Initially the medications used were barbiturates and methaqualone related compounds. Barbiturates like secobarbital (Seconal – marketed by Eli LIlly) and phenobarbital (Luminal – Bayer) were widely used and abused in the treatment of anxiety until it became clear how severely addictive they are. The same was true of methaqualone (Quaalude – Rorer).

So when the benzodiazepines came to market in the early 1960’s they seemed like a godsend. Withdrawal adverse effects were less severe and there were fewer side effects. The most popular of these medications, diazepam (Valium – Hoffman La Roche) became the go to drug for a generation of doctors treating people with anxiety.

However, this initial optimism about the medications turned out to be somewhat misplaced. While it is true that withdrawal is less severe, in general, than withdrawal from barbiturates, and overdose is much safer, withdrawal can still be dangerous and very unpleasant, and the medications don’t seem to be less likely to cause tolerance and addiction.

Benzodiazepines are now seen as excellent medications for the short term treatment of situational anxiety (caused by a clear stressor and likely to resolve) but need to be viewed with caution when prescribed for more chronic forms of anxiety.

The two main problems are –

This is not to say that chronic benzodiazepine use is never appropriate, for certain people with severe anxiety disorders there may not be good alternatives. But they have to be used carefully and with full knowledge of the adverse effects.

Benzodiazepines can be classified using a two by two matrix based on key pharmacologic properties. Some of these medications are short acting (12 hours or less) and some of them can stay in the body for much longer, up to several days. Also, some of the medications are fat soluble, which means that they are absorbed very quickly, 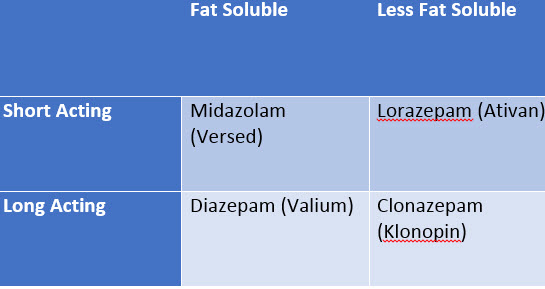 and, in addition to more rapid action, is associated with a greater abuse potential.

Lorazepam is very commonly prescribed because it is not very fat soluble and lasts about 8 to 10 hours (thus it can be given at night without too much daytime sedation). Diazepam is not a preferred agent for must people, except it is a good choice for an “emergency” medication for someone with panic attacks because it works relatively quickly.

We have covered several classes of medications that work relatively quickly and may be useful for short term but not long term anxiety because of abuse potential and adverse reactions. What is useful for people who have chronic anxiety (for example someone with generalized anxiety or chronic problems with panic anxiety)?

In addition, there is a medication that is probably underused for chronic, generalized anxiety, Buspirone. It is the opposite of benzodiazepines in many ways, it takes days to weeks to work, has no sedating effects, and makes people more alert and less prone to falls. However, because it takes a while to work and its immediate effects are definitely NOT to improve anxiety, it is the classic medication that is effective, but people think it isn’t working… And so it can be difficult to convince people to take it, especially people who are used to the immediate buzz from benzodiazepines.