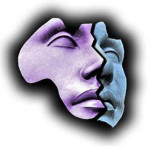 I am writing a presentation for the UCSF Bipolar Program on the topic of the relationship between Borderline Personality Disorder and Bipolar Disorder and I thought I would jot down some of my thoughts in a quick post.

Borderline personality disorder involves a “pervasive pattern of instability of interpersonal relationships, self-image, and affects, and marked impulsivity” which begins by early adulthood and is present in many different aspects of a person’s life.

Bipolar disorder also begins by early adulthood, almost always affects many aspects of a person’s life, and is associated with unstable affect (or mood). Mood instability usually affects other aspects of a person’s life (self-image and interpersonal relationships) and some people with bipolar disorder also have a pattern of impulsivity in making decisions.

Clearly there is a lot of overlap.

Add in the fact that often bipolar is associated with posttraumatic stress (either childhood or adult trauma, such as violence, rape, etcetera), and the likelihood that someone with bipolar might also appear to be borderline becomes even greater.

I was intrigued by this notion because in our clinic we have had a fair amount of experience with people who have borderline and have “discovered” opiates (pain pills or even heroin) and become addicted. Opiates made them feel “OK” but, then they learned that they could not control their use. And in some people we have been able to achieve much better mood stability when we used buprenorphine as a treatment for their addiction.

Here is where adding posttraumatic stress to bipolar complicates things – because the key feature of PTSD is also a heightened reactivity to certain events (ones that connect in some way to the traumatic events).

One of the things that I see all the time is that the brain’s need to understand and explain events means that most people are able to come up with events that “caused” their mood to shift, even when, on closer examination, there doesn’t appear to be any relationship between the event and the mood… or the mood change began before the event… and it was the change in mood that made the event seem so stressful. (For example, someone says that they are depressed because they have been having pain from a chronic knee injury, but further exploration reveals that there have been many times when the pain was not nearly as disturbing in the past, because the person’s mood was better then).

When trying to figure out whether a person has borderline personality –

This graph illustrates how complicated all of this can be. This is a mood chart (anxiety, sensitivity, mental speed, and optimism or pessimism) along with a sleep record for someone who has bipolar (inherited from her father) plus borderline personality.

What you see is the sleep record across the top (dark blue line) and below that a graph of mental energy (orange line) and outlook (the highlighted blue grey line at the bottom).

This record covers the period from September through March of this year.

The next few graphs show how there are at least three different sources for mood variation. There is a distinct pre-menstrual pattern of pretty dramatic worsening of mood (the red arrows show when her menses took place and show how some of the variation in mood is clearly linked to a sudden dip before menstruation.

The next graph shows that her mood has pretty marked day to day variation (some amount of variation is typical, it is very rare to

see a mood chart that looks like the kind of smooth graphs that one imagines should characterize a bipolar mood swing). She consistently rates herself as dipping down into the deepest state of pessimism every few days throughout the record. The same variability is seen in her sleep and her self rating of mental energy. This is the hyperresponsivity to stress that is characteristic of borderline personality (in that it is a shift into intense negative mood much more than a shift into hyperalertness (as one might see with someone with PTSD).

Finally, if you pull back from the chart you can also see a longer term trend in her mood which seems more characteristic of bipolar mood variation. For one thing, it begins a week or two after starting Prozac. And

for another it follows the typical mood pattern that she has – she tends to shift quickly from depression into a slightly energized (hypomanic) state. Then that energized state gradually drifts back down to “normal” and, often, drifts further down into a depression that can last for many months. When she is depressed her mood shows less variability (she doesn’t have sudden bursts of energy). This pattern of a quick shift into hypomania or mania and then a gradual drift down into depression is known as the DMI pattern.