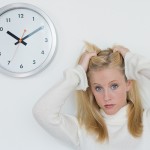 We met this afternoon with a delightful young man who said he was having more anxiety and depression because of all of the stressful things that he had to deal with.

He gave us a list, and, perhaps because we are natural skeptics, we started to wonder whether that list really explained what was going on.

For one thing, as we thought back on our work with him, it seemed to us that the stressors he was dealing with were no worse than at other times when his mood seemed to be much better. In fact, as we started to think about it, we wondered if perhaps the stresses in his life weren’t less severe than at times when he was doing better.We asked him if, perhaps, he might be one of those people who has difficulty with boredom. After some thought, he said that boredom was really difficult for him. We were able to think back on several other times when he was very bored, and realized that his level of “stress” during those times, when actually there were very few challenges,  was usually very high.Many years ago, we read a book that very much influenced our life and work. The book is by an author whose name is nearly unpronounceable (Mihaly Csikszentmihalyi). It is called Flow: The Psychology of Optimal Experience.

There is much of value in the book (now in a new edition) but what we most remember was an interesting set of experiments that were done many years ago. A random sample of people were given pagers and asked to note, when the pager went off, to note what they were doing and how they were feeling. The idea was to get a random sample of mood and what was going on in people’s lives and try to see what the correlation was between the two.Before the experiment, everyone felt that mood would be best when people were at home relaxing, maybe watching TV, without too much stress and hassle. And, they felt mood would be worse at work with challenging situations and tasks that needed to be accomplished.The result was intriguing. People were often most unhappy when they were at home with nothing to do watching television. And, they were often most happy when they were at work.The author proposed that the common sense notion of stress as a bad thing, to be avoided, was often wrong. The relationship between stress and happiness follows a bell curve. Happiness is greatest not where stress is least (usually a place of boredom and unhappiness) but at a point where there are challenges, but these challenges are manageable. Hans Selye called this state “eustress”.

Challenge is not the only issue that determines happiness. There is the question of how competent one feels in dealing with a challenge. As you can see in the diagram to the right, “flow” (a state related to eustress) is achieved when 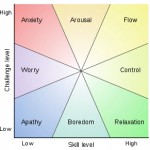 challenge is high and skill level is high. This is the state of greatest happiness where the mind is fully engaged in the moment, in the task at hand.

Of course, another factor is the attitude we take towards the challenge. Do we embrace it, or do we resent it (“why can’t I go back to watching my videos”) or fear it (“I am no good at this kind of problem”) . These are factors that we have some control over. And in his book Authentic Happiness, Martin Seligman writes more about some of these factors that determine how happy we are in life.

So, next time you are feeling “stressed out” consider the possibility that you might actually be bored. Or that you could view whatever challenges you are dealing with in a different way, as a chance to learn, or explore, or grow.