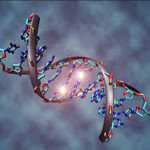 At a recent scientific meeting, Rachael Yehada showed that traits that are related to posttraumatic stress disorder PTSD can be passed on to children during pregnancy.

Mothers in New York City who were pregnant on September 11, 2001 and developed post-traumatic stress disorder (PTSD) had children with low cortisol in their blood (a sign of PTSD). But if the fathers had PTSD during the mother’s pregnancy, the children had high cortisol.

How can we change the way that brains work in our children without any communication with them?

There are two ways of modifying gene expression (illustrated in the diagram to the left) In this case we are talking about one of these – DNA methylation. This involves  adding methyl groups to certain key places on DNA that

determine how active or inactive a gene will be on an ongoing basis.

This process is known as the epigenetic modification of genes or genomic imprinting. It is different from the traditional process of inheritance (whether I have blue or brown eyes depends on the two genes I inherit from my parents) because I may inherit certain genes but those genes still may not determine the traits that I acquire.

if I have a gene that I inherit from my mother that would ordinarily create a normal amount of cortisol, that gene may be regulated (turned on or off) depending on whether or not there is a methyl group attached to the “start” switch on the gene.

Methylation is affected by many stress related processes in the body. And in the fetus, the mother’s level of stress can change brain regulation of the developing child in a way that may persist for a lifetime.

In fact, methylation of genes can, in some cases, be passed on to the next generation of children.

This process may serve to explain how it is that we often find that children of disaster survivors (for example Auschwitz) carry certain traits and vulnerabilities that are similar to those of their parents… Even when these traits were not present in the preceding generation.

And it may explain why the recovery from severe trauma may take more than one generation.